Honorary members of the DZK

Mr. Volker Härtter, lawyer and experienced personnel manager of the LVA Rheinprovinz (today German Pension Insurance Rhineland) in Düsseldorf, was active in the DZK for many years. At first he was one of two auditors in the years 1986 to 1990; from 1990 to 1995, he represented the regional associations as an observer in the DZK Presidium (he was managing director of the Rheinischer Tuberkulose-Ausschuss e.V. in Düsseldorf until its dissolution in 2008). From 1995 to 2008, he provided the DZK with his great experience as Vice President (not only in personnel matters) and was a frequent representative of the presidents and an important advisor who made a significant contribution to the stability of the DZK. At his retirement in 2008, he was awarded honorary membership because of his great merits. 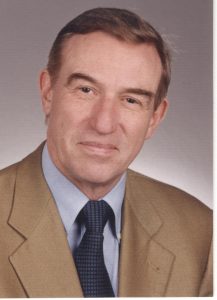 Until his retirement at the end of 2005, he was Medical Director of the Emil-von-Behring HELIOS Clinic in Berlin and Chief Physician of Pneumology II at the Heckeshorn Pulmonary Clinic. He was professor at the Charité University Hospital in Berlin. From 1998 to 1999, he was President of the European Respiratory Society [ERS], from 2004 to 2008, President of the European Region of the International Union against Tuberculosis and Lung Disease (IUATLD), and in 2007, Co-Chairman of the IUATLD Congress in Riga/Latvia. He is the author of over 400 publications and (co-)author of numerous specialist books in the field of pneumology and tuberculosis.

He is Honorary Professor of the University of Skopje/Macedonia and honorary doctor of the Russian Academy of Medical Sciences. He has been awarded honorary memberships by the DGP, ERS, and IUATLD, among others.

Register for our newsletter (only available in German)