What is
tuberculosis?
Here you will find information about
the infectious disease tuberculosis

Tuberculosis is an infectious disease and is caused by a slowly growing bacteria called Mycobacteria tuberculosis. The bacteria can be transmitted from person to person by coughing, sneezing, singing or speaking. It is estimated that after an infection, only about 5–10% of people become ill. It can take months – sometimes even years – between infection and illness. A sick person usually develops symptoms some time after infection. Typical symptoms include coughing, mild fever, or weight loss. If these symptoms persist for a long time, it may be tuberculosis. If tuberculosis bacteria are detected, the effectiveness of the tuberculosis medications is tested in the laboratory. In Germany, all four standard medications (isoniazid, rifampicin, pyrazinamide, ethambutol) are effective in about 90% of the tested cases and can therefore be used. Patients must take the standard medication for at least six months and get cured in most cases.
However, only about one in ten people develop a disease after an infection. In 2018, 10 million people contracted tuberculosis, and about 1.5 million people died. Tuberculosis is therefore still one of the 10 most frequent causes of death worldwide.

How can I tell if I have tuberculosis? What are the typical symptoms?

People who suffer from pulmonary tuberculosis often have a cough and a mild fever. However, these symptoms are not specific and also occur with common colds, for example. However, if the symptoms persist for several weeks or if other symptoms such as heavy sweating, unwanted weight loss, or fatigue appear, tuberculosis must also be considered. It is then necessary to have a chest x-ray and possibly further examinations. In rare cases, tuberculosis can also affect organs other than the lungs. Especially if you had contact with someone with tuberculosis, you should consult a doctor if you have any of the symptoms.

How do you get tuberculosis?

Tuberculosis is almost always curable when treated effectively and all medications are taken as prescribed. However, in rare cases, there are pathogens that no longer respond to all medications or other circumstances that make therapy difficult. In Germany, the conditions are highly conducive for successfully treating resistant tuberculosis. In other parts of the world, the conditions for this are often not met, Tuberculosis is not diagnosed or diagnosed much too late, the right medication is not available, or – in many cases – the patients cannot afford it. Treatment and cure of tuberculosis is then not possible. Tuberculosis is therefore still one of the 10 leading causes of death worldwide.

Does tuberculosis still exist in Germany?

Tuberculosis was a major problem in Germany in the post-war period, when there were no effective medications. Today we have managed to reduce tuberculosis by means of drug therapy and improved living conditions. Today tuberculosis has become rare in Germany. In 2016, 6000 new cases occurred in Germany. Because of the increased immigration in recent years, there have been more cases of tuberculosis reported because tuberculosis is more common in the home countries. Nevertheless, tuberculosis remains a rare disease in Germany. The risk of infection for the local population therefore remains very low.

How does tuberculosis develop?

Tuberculosis is caused by the bacterial species Mycobacterium tuberculosis. These are small, highly resistant pathogens that can be inhaled. In this way, the bacteria enter the lungs, where they are controlled or encapsulated by the body’s own immune defence system. Nevertheless, the tuberculosis bacteria can partially survive in a dormant state. Because the body recognises these infected cells and wants to eliminate them, an inflammatory reaction can occur. The human body is able to keep the infection with tuberculosis bacteria under control for months to years or even decades without medical intervention. The infected persons then do not fall ill or in some cases even heal. In 5–10% of cases, however, the immune system does not manage to stop the proliferation of bacteria. The inflammatory reaction then progresses and the tuberculosis disease develops; that’s when symptoms manifest.

Does everyone who gets tuberculosis get sick?

About 90% of adults infected with tuberculosis never develop the disease. They can control the infection with the help of their immune system. These infected persons are not ill, do not suffer, and are not contagious for others. The infection is referred to as a latent tuberculosis infection (LTBI) because the pathogens are present in a dormant form in the body. However, in the course of their lives, about 5–10% of infected people develop tuberculosis that needs to be treated. The risk of developing a disease is greatest in the first two years after infection.

The risk of infection and disease is higher for children and immunocompromised individuals.

What is multidrug-resistant (MDR) tuberculosis?

What is extensively drug-resistant (XDR) tuberculosis?

Can tuberculosis also affect organs other than the lungs?

What is lymph node tuberculosis?

In some patients, the lymph nodes are affected by tuberculosis. This can then cause painless lymph node swelling in the neck, armpits, loins, or other parts of the body. Sometimes the lungs are also affected. However, lymph node swelling can also have other causes. A small amount of fluid or tissue is extracted with a syringe to find out what the reason can be. This is referred to as a lymph node puncture or biopsy. Sometimes the lymph node is also removed in total. The material obtained is then tested in the laboratory for tuberculosis and other diseases. A swollen lymph node sometimes breaks on its own, and a fluid is excreted. This liquid can contain tuberculosis bacteria and can be contagious. Oozing wounds should therefore be kept clean and covered with a bandage. The treatment for lymph node tuberculosis is the same as for pulmonary tuberculosis. Those affected are usually cured after the treatment.

What is pleural tuberculosis?

In some patients, the pleura is affected by tuberculosis, even though the lung is by far the most common site of the disease and may also be affected. The Pleura is a thin membrane and lies between the inside of the ribs and the outside of the lungs. The disease is referred to as pleural tuberculosis or pleuritis tuberculosa.  Inflammation of the pleura often causes an accumulation of fluid between the lungs and chest. This can cause shortness of breath. The fluid is punctured with a small needle, drained and tested in the laboratory for tuberculosis and other diseases. This pleural puncture can often improve breathing. Often an additional operation – referred to as a pleuroscopy or thoracoscopy – is necessary. The thoracic cavity is examined through a small incision with a device (laparoscope), and specific samples are obtained in order to detect tuberculosis. The treatment for pleural tuberculosis is the same as for pulmonary tuberculosis. Those affected are usually cured after the treatment.

What is urogenital tuberculosis?

Can tuberculosis be cured?

The chances of cure for people with tuberculosis are very good when all drugs are taken consistently and in sufficient doses for the entire duration of treatment. If the medication is stopped too early or is not taken regularly every day, the therapy may fail. The treatment time is relatively long. However, the entire treatment is necessary, even if you feel healthy after a few weeks. Even if the bacteria can no longer be detected in the laboratory, sometimes a small number of bacteria are still present at the site of infection. These can be killed only if the medication is taken for the entire duration of the therapy.

Is tuberculosis also present in animals?

Animals can also be infected with tuberculosis and become ill. If there are pets or farm animals in the household of a person suffering from infectious tuberculosis, it should be decided together with the doctor, the health office, and the veterinarian whether an examination of the animal makes sense.
In rare cases, humans can also become infected with tuberculosis from animals. For example, this is known from bovine tuberculosis, which was common in Germany until the post-war period but is now rare. Bovine herds in Germany are considered to be free of tuberculosis. Only isolated cases and small regional outbreaks have been observed in recent years. Bovine tuberculosis is notifiable in Germany, and the situation is monitored by the veterinary authorities.
In other countries, especially in Africa, Asia, and South America, bovine tuberculosis is still widespread, and infection can occur in particular through unpasteurised dairy products.

What are nontuberculous mycobacteria (NTM)?

The group of nontuberculous mycobacteria (NTM) includes a variety of pathogens. These are related to the causative agent of tuberculosis (Mycobacterium tuberculosis). Contrary to tuberculosis, however, these are only pathogenic under certain conditions. The germs can be detected everywhere in the environment, e.g. in the water or in the soil, some even in the oral cavity of healthy people. However, in immunocompromised people or people with chronic lung disease, these pathogens can sometimes lead to diseases similar to tuberculosis. Contrary to some pulmonary tuberculosis, these patients are not contagious to others and therefore do not need to be isolated. The treatment is nevertheless very lengthy and consists of a combination of several antibiotics, which often have to be taken for years.

Interviews with experts and patients.

In the video clips, our experts answer frequently asked questions, and patients tell about their illness in a video interview. 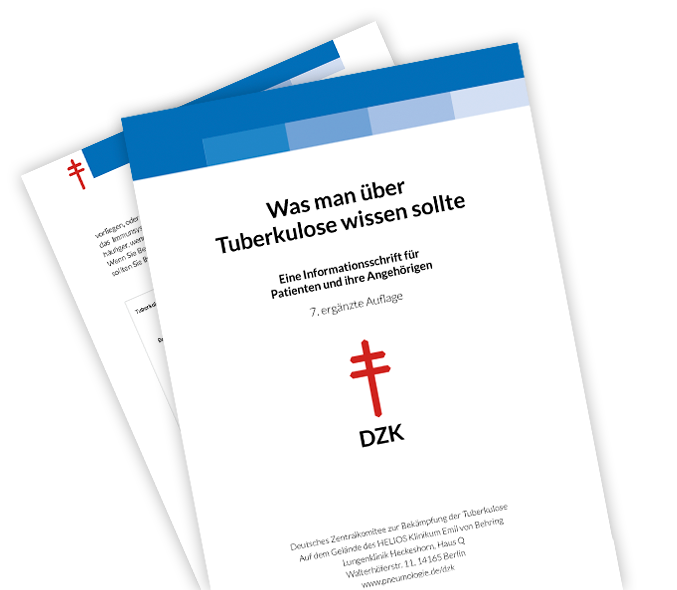 To read more, you can find the free brochure here